Quality multimedia boxes are not numerous in France, and yet, users are fed up of standard interfaces of TV and internet boxes. In front of the Apple TV stands a little unknown machine: The Shield TV, designed by Nvidia. We tested it.

The box TV market is not the most developed in France. In fact, unlike in the United States, our market is structured around the boxes of operators who have played the role of the central pillar of the TV offer since their inception. But in other countries, the war rages to control the living room: this is why consoles, in particular, become more and more complete multimedia stations or that we no longer design a television without its smart interface.

That said, even in our countries, we are beginning to see the limits of operator boxes. The interfaces are middle-aged, everything is raging, there is a lack of compatibility with the rest of the hardware, and there is an increasing sense of paying for a service that is not used — many would like to have a simple fibre or ADSL connection rather than a combined offer. At the other end of the chain, television manufacturers struggle to master the technique and even on televisions with several thousand euros, we find completely horrible Android TV integrations that have made our colleagues in FrAndroid tear their hair out more than once.

Box TV seems to be gradually finding legitimacy in our homes. The latest Apple TV is a little gem of ergonomics and speed that perhaps only lacks the 4K to fill us. On the Android side, the contenders are few, but never mind, the alternative exists. And in 2017, it’s called S. H. I. E. L. D. and costs € 209.

The Nvidia Shield is a small Android box equipped with a configuration that brings it closer to the Nintendo Switch (they share the same Tegra X1 chip, which was customized by Nvidia for Nintendo). It comes with a remote control and a wireless controller that recharges on battery. Its HDMI port is capable of sending a 4K HDR stream to a compatible TV and it can decode the standard Dolby Atmos and DTS-X audio level, via the HDMI port. The basic version features 16 GB of storage, extensible with external devices — from hard drive to USB stick.

For connectivity, you will find 2 USB 3.0 ports (Type A), an HDMI 2.0 port and an Ethernet port. This is a little less provided than the previous version, but The Shield gains a very nice compact side. With its 250 grams and measurements of 9.8 cm wide by 15.9 cm long, you can completely make it disappear in a piece of furniture and never see it again if the minimalism of your furniture is important to you. Compared to the 2016 version, we also note that the button to turn it on is much smaller and therefore less annoying: we tended to turn it on and off by mistake every time we plugged in an accessory.

Shield TV is accompanied by a gamepad much more ergonomic than the one from 2016, which looked like the BigBen controller you give to your friends when you invite them to play the console. We find ourselves on this version with a slender joystick that holds well in hands and allows to play comfortably — the joysticks of the competitors remain compatible no matter what happens. It now has the functionalities of the previous remote control: it has a microphone that you can always configure on to activate the functions of Google Assistant. The controller recharges with micro-USB and will last 60 hours without flinching — an estimate that we can confirm without any trouble.

Next to it, the classic remote control is a little more cheap and less elegant than that of the Apple TV. Nvidia switched the advanced features of the previous remote control to make it a cheaper model. Exit therefore the mic always on and the charging battery. It thus gains autonomy and allows the manufacturer to sell its first-prize bundle at a lower price : the previous generation Shield was sold without a joystick — a bit of a pity for a box TV that still has a big part of its DNA based on the game. 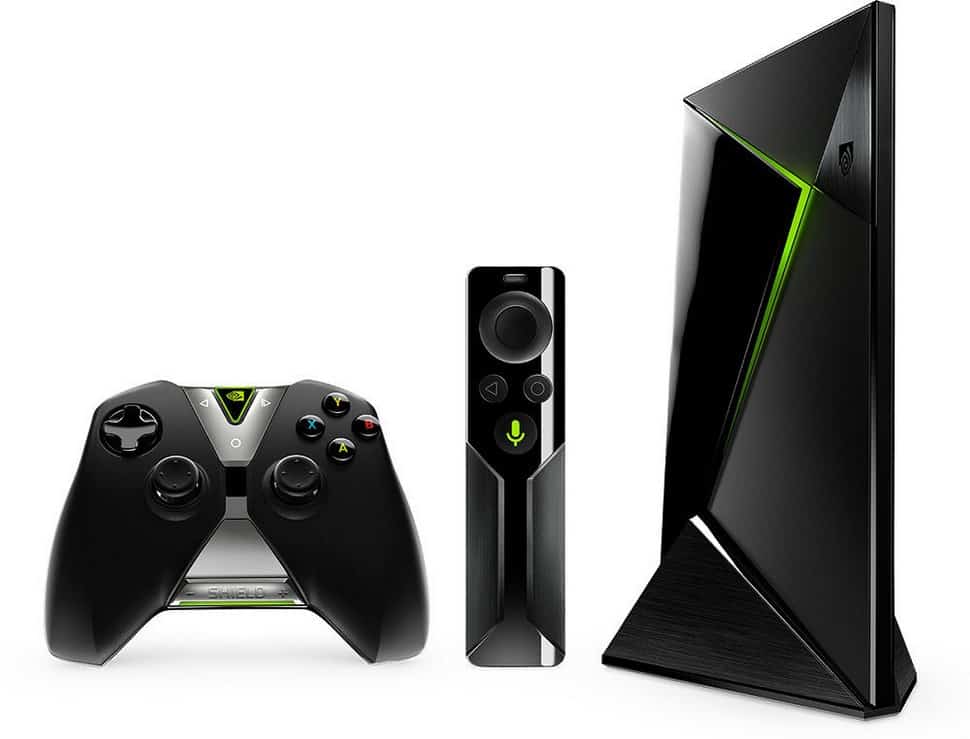